on April 04, 2013
I'm almost embarrassed to even post this considering some of the gorgeous shots that have been posted in various places (see links below for a couple), but here's my pathetic M31 and Comet Pan-STARRS. Taken from Landers, California tonight at about 8:30PM with a Canon EOS 60Da, EF 200mm lens at f/3.5, 30-seconds, ISO 1000. The camera was mounted on a Losmandy Starlapse.

The sky was still relatively bright in the northwest and, obviously, the comet was pretty darn low in the sky... behind some thin clouds... and it was windy... and... and... ok, enough excuses. 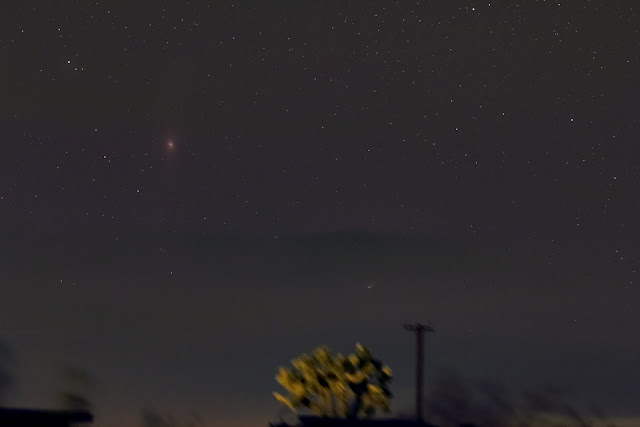 There are a lot of interesting things about the asteroid known as 3200 Phaethon. Here are a few of those fascinating tidbits: It was discovered in 1983 (it was preliminary known as 1983 TB upon confirmation of discovery) and was the first asteroid to be discovered using images from a spacecraft. During its orbital period, 3200 Phaethon gets closer to the Sun than any other named asteroid. Its name derives from the fact that it gets so close to the Sun. Let me explain: The Greek Sun God, Helios, had a son. His name was Phaëthon... Fast forward thousands of years, humans discover an asteroid that comes really close to the Sun every 30-ish years, we name the asteroid after that son of the Greek Sun God because, like all good sons, he comes to visit his father about once every 30 years then leaves. It has offspring of its own: the Geminid meteor shower. Let's focus on that last one for a bit. Most meteor showers have a comet as its parent. Comets are known to shed materia